Aching joints forgotten, or ignored in the joy of this moment - glorious anticipation!

“Got the right board mate?”
“No worries”
Bodies long and lean still,
stretch carefully, a graceful rhythm: yoga’s ‘Salute to the Sun’.
Injury prevention better than cure!

A swarm now, word’s got around

Surf’s up!
***
* a tradie is a tradesman such as carpenter, bricklayer or similar, who have a reputation for working when there's no surf.

Photos taken at Broken Head near Byron Bay NSW on the trip to the Happiness and its Causes conference June 2011 in Brisbane. You can read about it here.
.
Posted by Sue at 11:25 AM 2 comments:

The journey to Happiness: Waves 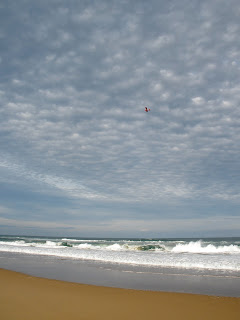 antagonistic; at odds with each other and the world, fight their way to shore. Push and elbow others aside for supremacy.

In their race to win they fling aside tendrils of spray; shovel mounds of sand from ocean floor to add weight to their angry bluster. Yellow now and murky, they jostle and elbow aside smaller kin, devour, then attack the shore with ferocious assault. 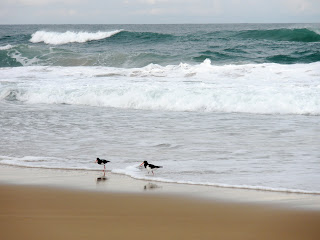 A pair of pied oyster-catchers probe for food, oblivious to their apparent peril, delicate at the water’s edge. 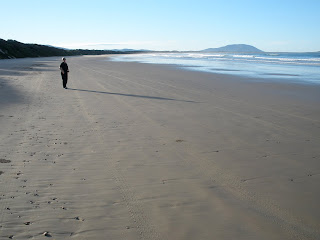 Footsteps, one pair horse-shoe heeled, the other spine ribbed, weave companionably along the desolate sands.

Photos taken at the Bongil Bongil National Park NSW on the road trip to the Happiness and its Causes conference in Brisbane June 2011.
.
Posted by Sue at 4:26 PM 5 comments:

Lazy waves lack the energy to break with any enthusiasm. Lethargic and purposeless, barely shift minute grains of sand. 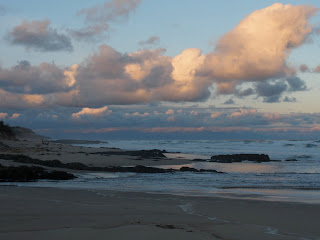 They flop to shore and pause as if to survey the scene. Slide, exhausted back down the sandy shore. Too much effort to make a break and stand out from their lacklustre mates gently forming behind. 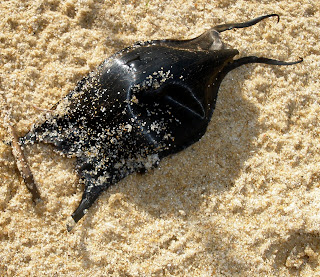 A shark egg, shiny black and spiky, clung to seaweed.

Sharks, a life form being plundered and slaughtered as if expendable. Fins a delicacy, sliced from living flesh, the bodies still writhing, flung aside, count for naught, to drown and sink.

***
Link to an article on the frightful impact that humans are having on the oceans here. In a nutshell overfishing and pollution remove the conditions needed for fish to survive in many of our earth's oceans. At all.

We'll be left with algaes and possibly jellyfish.

The seas provide up to a 1/4 of the world's protein - that's a huge amount to kill off in our lifetime. Scientists expected this to happen in the lifetimes of our children or grandchildren (and won't they thank us for this willful destruction) but it's happening now. It's like there's some kind of mass, worldwide amnesia (wrong word, but I can't think of the correct one) happening, or do we as a species want to kill ourselves off?

The lightkeeper points – “Tassie is that way, and Antarctica. We get seven metre swells on the rocks there. The weather station is broken ‘cos the winds blew it apart.” Long straggly ponytail snakes from under his regulation cap. He continues “The light used to float in a mercury bath; it sent many lightkeepers insane, but it saved lots of lives too. If the mariners could see the reddened windows they knew it was time to hightail it out of there or they’d hit the rocks and go under. There were always two people up there from 4:30pm to 8am to keep the light burning. Even though they were so isolated, the light keeper's children weren’t allowed to mix with the children of the assistants. They could go six months without supplies if the weather was bad. Tough life”.

Tough life indeed, and this region is remote even today. The roads are rough and narrow, but the remoteness adds to its attraction for those who are prepared to camp with few mod-cons. Actually, that should probably read no mod-cons as there are two long drop toilets and that's really it. BYO water, or get it from the creek. No power. No phone reception. It's peaceful!
These days the solar light is mainly used by local fishermen and small boat operators as the main shipping lanes have been moved further out to sea to keep away from the oil and gas fields. But things still occasionally go wrong and the lightkeeper may need to hang perilously from the walkway in a howling gale to correct a problem. But it’s rare problem now, thankfully. 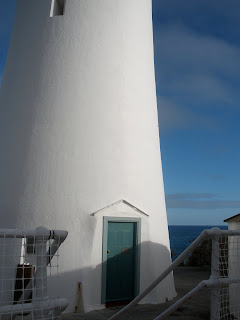 Captain Cook was the first European known to have named Point Hicks. He named it after Lieutenant Hicks who sighted it first from the Endeavour in 1770 when they were heading to Tahiti to observe the transit of Venus across the face of the sun. The area, rich in sea life and animals had been home to a number of Aboriginal tribes for thousands of years, but as has been so often the case, this fact was overlooked on European settlement.

Before the lighthouse was erected in 1888, many ships foundered battling the wild seas and difficult weather. Even when the lighthouse was complete, vessels foundered within range of its light.  Heavy seas, fog, sea mist, maybe poor seamanship or unseaworthy vessels were the possible causes.

The area on which the light-station is built is described as being a bleak, desolate and windswept point. It’s an accurate description. Everything had to be carried by ship, and landed during lulls in the weather. Livestock including goats, sheep goats and cows were kept to supplement the irregular supplies.

The cast-iron internal staircase was cast in Melbourne and the lantern house was built in England. I find it amazing that there was no one skilled enough to make the lantern house in Australia. It would have taken months to transport it.
It is a beautiful structure and it’s possible nowadays to book and stay at the assistant's cottages if you want a holiday with a difference.

According to Robert Haldane in 'A Beacon on the Wilderness Coast:  The Story of Point Hicks (Cape Everard)' (link), during the First World War mines were laid by a German raider along the Melbourne-Sydney shipping lanes and at least one ship struck a mine. During the Second World War a freighter along the coastline was torpedoed and sunk by a Japanese submarine, 38 lives were lost. This sort of information was censored heavily during the wars, and even today is greeted with amazement. It's as if the government wanted to eradicate these records entirely and for eternity.
The lighthouse tower is open to visitors, and the view is breathtaking, but there have apparently been complaints from some prudish visitors about the obelisk and cairn marking Cook’s voyage and commemorating those who lost their lives in the various shipping incidents. They consider the shape too phallic. Tut tut.

The journey to Happiness

The goal was to head to Brisbane from Melbourne to attend the “Happiness and its Causes” conference in early June. I find the conference title a bit twee and schmaltzy, conjuring up images of falsely cheerful games show hosts with toothy smiles, but the calibre of the presenters was good so I thought I’d give it a go.

Flying would have been convenient, but lacking excitement (hopefully!) and so the brilliant idea to drive a thousand and something kilometres, and explore new (to us) National Parks on the way was hatched. A couple were somewhat off the beaten track, where the amenities included pit toilets, a river for water (with strict instructions for all water to be boiled), and not much else … no power, no internet, no electronic connection, nothing. Perfect spots to rejuvenate flagging spirits! I'll share that later on.

Two private camping grounds offered free wifi, but frustratingly it didn’t work at all at one, and at the other you had to be sitting ‘just so’ for it to work. Visualise me huddled at an awkward angle, beanie and coat protecting me against a brisk sea breeze, perched at a wooden picnic bench, bush turkeys at my feet, with the ocean in the distance, a lighthouse on the headland and dense bush surrounding the not very large campground - it was glorious.
To go from that to a conference in a city, even one the size of Brisbane was a bit of a contrast – all chattering excitement and enthusiasm and radio broadcasting and high tech communication and security.

There were monks, and other religious people, professionals, retirees, actors, TV personalities, in fact people from all walks of life – nearly 2½ thousand of them, all there to learn something new, or seeking insights or reassurance or to share their own experiences.
Anyhow… It’s finished, my conference handouts are dog-eared, scrawled with notes and I’m almost ready to begin sharing that aspect of my trip with you over at traverselife. I’ve also vigorously patted myself on the back for resisting the temptation to purchase a mountain of books from the extremely well stocked bookstore.

I  now have a window of almost two weeks with good, reliable internet connection, then I’m off exploring again on the way home. So I’ll only be around for a while before I’m out of range for a few more weeks – the aim is to travel inland on the way back, through some of the desert and arid country. In the meantime, it’s good to be back and see your warm comments wishing me well.

The steady "thuk, thuk," of fat, lazy drops of rain,
flopping, lethargic on the tent awning,
unhurried, yet wetly persistent; fall from overhanging leaves and limbs.

Mozzies buzz; keen to feed - undeterred by rain and cold.

Think of friends touring Europe, the art and culture,
crowds and queues,