You can be sure that Aussies have an unhappy relationship with the US when the issue of coffee is discussed on the National News in serious tones. But while we often hear about "that disgusting muck that passes for coffee in the US", or "a pale imitation of the real thing", and sometimes, "it's even worse than used dishwater", we rarely hear about what the Yanks think about the glorious beverage we treat with deep respect.

I was delighted when I attended a conference in Sydney recently, to discover that there wouldn't be urns of stale coffee waiting to be dispensed into ghastly styrene cups at break times, or even barely palatable ground and filtered coffee, which has often been sitting for hours and become bitter and decidedly unpleasant. No! The organisers clearly understood the needs of the group and had arranged for four high-tech, mobile coffee machines, staffed with keen-eyed and enthusiastic baristas, to wait on attendees. The beans were freshly roasted, then ground as needed, the milk (your choice of full cream, low fat or soy) heated and frothed as required, to become a welcome cappuccino. Yeehaaaaa!
At morning break, the situation on the coffee machines was as streamlined as humanly possible; one person writing the name and order on the plastic lid, one person working the coffee grinder and filter basket, (or hot water for those who wanted tea) and another frothing the milk. Very impressive!

However, not everyone was happy.

I was eagerly waiting for my order when I became aware of a tense, some might even say terse, exchange between a barista and a conference attendee, an American woman who clearly wasn't happy with the beverage she had been given.

The look of complete confusion on the barista's face would have been amusing in a different place. You could see her thinking "You asked for coffee, we made you coffee - how could that be wrong?"

My attempt at explaining the differences in terminology, strength and taste were met with an icy chill - clearly the woman needed her kind of coffee NOW!

The cogs in the American woman's brain were apparently struggling with lack of caffein. She began a few sentences, then finally spluttered: "I want American cawfee".

A look of comprehension "Oh you mean a long black!"

Oh deary me - this was not going well.

The poor American couldn't bring herself to repeat the words, such is the power of cultural taboos and inappropriate language with its racist overtones. I'm not sure what she was visualising, but I doubt it was a cup of coffee.

By now her husband had joined her and taken his cup of coffee - aka cappuccino - with a look of disgust. It appears that they hadn't realised that simply ordering a "coffee" will lead to confusion and that in the hurly burly of the noisy morning break, and without further clarification, that a cappuccino would be produced with a professional flourish.

So, it goes both ways, it seems that on the subject of coffee, the differences in our expectations and tastes far outweigh the similarities and that many of us return home to our respective countries with tales of undrinkable coffee.
In the interests of easing cross cultural coffee tension it might be an idea to study How to order coffee before leaving home ;-)

My previous spluttering post about the American excuse for coffee is here.

Perplexing signs which lead to questions rather than answers.

What on earth does this sign, strategically placed atop the motel toilet seat, tucked in carefully and neatly between the lid and the seat mean?

"Hygenically Cleaned
and Sealed
for your Protection" 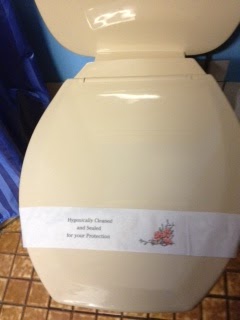 I understand the individual words and I think I know what it's getting at, but why is it considered necessary? It raises so many questions ... most appear to have no answer.

Of course it's nice to know that someone has spent time hygenically cleaning the toilet, that's great! So much more welcoming than an unhygenically cleaned loo, brilliant in fact and totally welcoming after a long coffee fuelled drive.

Good to know that a vicious chemical has been sloshed around because as we all know it's so very important for the rear end to be protected in this way and for that chemical to be flushed away into the sewerage system to be treated, neutralised and "disposed of". Vital for one's health wouldn't you say?

Seriously though, I'm never sure what it is I'm meant to be protected from. Extensive research (I asked a couple of friends) has led to more confusion. There are vague comments, some lacklustre handwaving and the implication that "Really you should know about this without being so uncouth as to need to ask."

Clearly I'm not being protected from a white pointer or a croc. It's possible that any stray red-backs or white tails (small, particularly nasty spiders) have been moved on and that's welcome news, but somehow I don't think the sign relates to spiders.

But this is Australia, so it's possible I suppose.

However it's not the toilet I'm most concerned about when arriving at a motel. It's the cutlery and crockery I'd be keen to see with the sign strategically placed, obvious and reassuring: 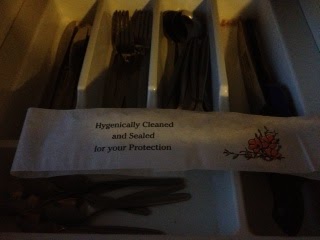 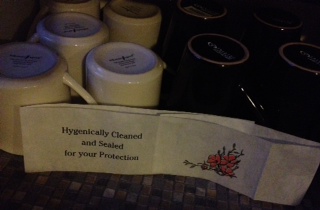 Because, at present, my dread is that the same person who "hygenically" cleaned the toilet may have inadvertently used the same cloth to "clean" the mugs and glasses after the previous occupant left them unwashed, with toothpaste smeared around the rim, or with dregs of tea or whiskey in the bottom.

The cleaner wonders: "Hmm, let's see, which cloth did I use in the bathroom? Was it this one, or that one? Oh, hang it all, who cares, no time to waste, on with the cleaning!"

Or perhaps the previous occupant had a cold sore, the flu, a sneezy snuffly cold or some other infection; and being a thoughtful kind of soul they swished some lukewarm water around the drinking vessel then dried it with the bath mat or bath towel, generously spreading germs, soap debris and assorted grime around. They've then placed the items neatly back in place ready for the next occupant to use without any trustworthy sign reminding one to wonder about hygiene or protection.

In short, the sign presumably put there to reassure me, is anything but reassuring!