I'm feeling a bit gushy about geology at the moment. I'll hasten to add that this isn't normal for me, but was brought on by reading a post on G+, 10 Reasons Geologists are Weird. What I haven't mentioned is that my first job after leaving school was with the exploration division of a mining company. I have the sneaking suspicion that working with geologists so closely and interpreting their maps and making them presentable for "the powers that be" did something to my head. Not in a bad way I hasten to add, but just ... something ....

A passing comment on G+ after reading about Weird Geologists led to a conversation about rocks and me posting a photo of a strange (to me) beachside rock formation near my hometown. There were grooves in the rock, and I'd decided that meant it HAD to be glacial! That led to the most intriguing post by Dana Hunter at En Tequila Es Verdad (here) and enabled me to see my home area through a different filter. Wow! What an exciting eye opener.

Now for the Dragon Hills (not their proper title)
I'd planned to post the following pictures some time ago and got sidetracked, but maybe now is a good time. These hills are in Mutawintji in outback New South Wales in the south west of the state. It's semi-arid land, red, and totally entrancing. It was near here that I first saw the International Space Station tumbling and catching the light of the sun in the deep night sky. I waved and called out a silent "hello" to the astronaut scientists working up there. 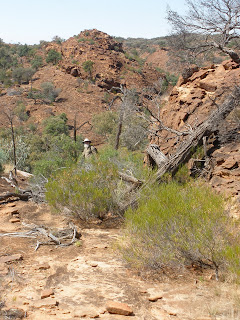 It's quiet out there. At the campground a few people enjoy the silence and watch the crazy Apostle birds, kangaroos, emus and when we were there packs of ferral goats and their kids. There are no towns for hundreds of kilometres, no distractions, nothing much at all ... except the most stunning, magnificent, awe inspiring scenery imaginable. 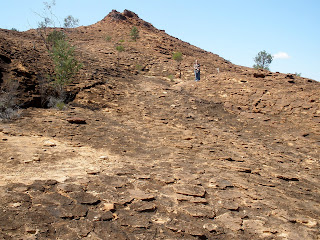 In parts it looks for all the world like the scales of dragons. As if they've fallen asleep in strange postures, curled and contorted over millennia. Trickles of water dribble down fissures and support some life: a few scraggly trees, lizards, roos, various birds and unfortunately the ferral goats. 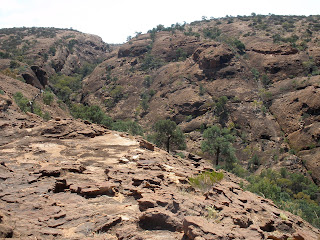 The hills stretch on and on. It's protected Aboriginal land further out, and you need to join a registered tour group to enter - pre-booking would have been advisable as they were booked out a week in advance. 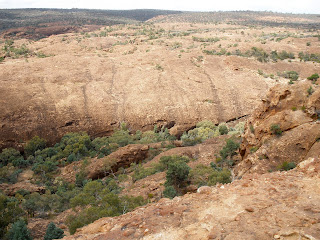 Below, the rocks look like they're dribbling down the slope, creating dangerous looking overhangs. Trees have taken root and cling tenaciously in damp cracks and gullies creating anorexic strands of welcome shade. I'm standing in the top right of the photo gazing in awe, wondering why I'd never heard hint of such a spectacular place. Friends' comment "yeah, it's pretty good" simply doesn't do it justice! 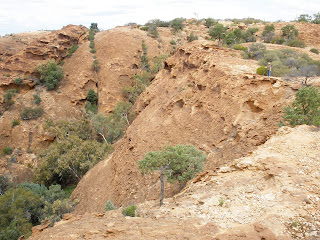 The NSW National Parks department describes the area thus: "The land and waterways, and the plants and animals that live in them, feature in all facets of Aboriginal culture - including recreational, ceremonial, spiritual and as a main source of food and medicine. They are associated with dreaming stories and cultural learning that is still passed on today."

What the Parks Department fails to mention is how breathtaking the area is and that it's worth spending more than a couple of nights out there soaking up the atmosphere.
.
Posted by Sue at 2:11 PM 1 comment:

What to do when a new untried recipe for Spelt bread is sending enticing memories of the aroma of freshly baked bread and you realise that the yeast is well past its use by date and is dead? Not just a little bit dead, but has gone grainy in the bottom of the jug where it's meant to be rising with frothy enthusiasm. The water is a putrid muddy yellow and the bubbles on top wouldn't raise a scant teaspoon of flour.

Bring on the beer ;)

The smoky pils that neither hubby nor I like, to be precise.  We still have quite a few bottles left and it's used for flavouring stews and soups. Why not try it instead of yeast! It will only require a little tweak of the recipe here and there, no problems...

So here we have Sue's No Fuss Spelt Beer Bread


Now theoretically you're meant to kneed the dough and all that stuff, but I couldn't get my rings off, so after I plonked everything in the basin, I used a spoon to swish it around a bit like making muffins then flopped it into a greased bread shaped tin. Then straight into the oven at about 200C. I checked after 20 mins and turned the tin around, then "knocked" on it after another 20 mins. A good hollow sound and fantastic smell - I know from experience it's best to wait a bit before cutting freshly baked bread - patience is a virtue and all that stuff, but it was worth it to enjoy it just slightly warm with some fresh bruschetta topping and a slice of cheese. Then the next slice with butter and a local honey.

The difficulty was not scoffing the lot - must remember mindful eating next time. 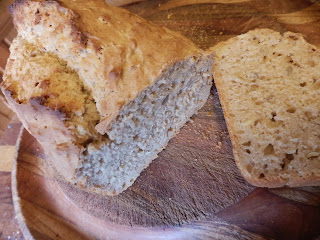 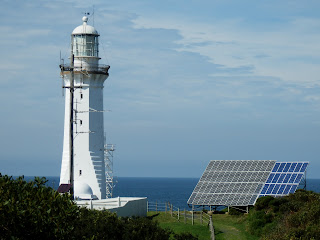 Even on a glorious autumn day, it's not hard to imagine the horror of being on a ship bound from Melbourne to Sydney in driving, gale force winds. Watching the tiny light from the Green Cape lightstation getting closer and closer and eventually realising that a treacherous reef would inevitably be struck and that survival would be a matter of fickle luck. Terrifying.

A miserable, dark night, with mountainous seas, splintering timber and bitterly cold water. Of the 86 people the Ly-ee-Moon was carrying,  71 men, women and children perished, their graveyard not far down a peaceful bushy track.  Amongst the passengers was the mother of Australia's only saint, Mary MacKillop. With the assistance of the lightkeeper and staff, amazingly, 15 men survived.

Last week, however, small fishing boats were experiencing a gentle massage from the lazy, undulating swell. They bobbed and swayed; the fishermen oblivious to the perplexed discussion happening atop the cliffs.

"Gee, the kelp is high out of the water over there."

"Can't be. Seals move, that's not moving at all. Didn't realise the rocks went so far out though."

We watched the apparent kelp sway back and forth for a few minutes. Nothing much seemed to be happening, but even so it was unusual.

Out comes the camera to take a pic and enlarge it on the itty-bitty camera screen.

"Yeah, maybe you're right, it does seem to be kelp, definitely not moving. But it's odd allthesame."

Fast forward to yesterday and a closer inspection of the photos enlarged on the computer: 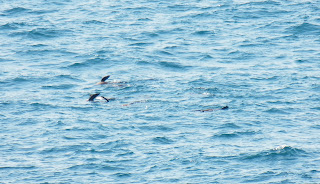 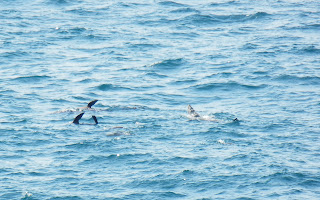 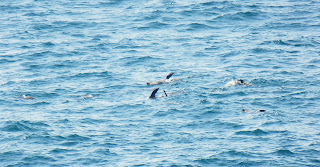 Definitely seals. Now, we've swum with seals a few times, we know they're curious and they're fast, and I've been spooked a few times when one has shot up from the murky depths like a rocket (or shark) and spun around to peer into my mask. Our experience is that they're cheeky and not known for loitering about. These weren't feeding, the apparent lack of movement puts paid to that idea, but could they have been mating? They were pretty static in the water which is why we thought it was kelp (we were quite a distance away) and the closeness of their flippers would suggest that.

Can anyone shed light on this behaviour for me?

Thanks to Felicitas Avendano from G+ for providing the following link that could shed light on the behaviour: They might have been "rafting" or "jughandling" - basically not doing much at all!