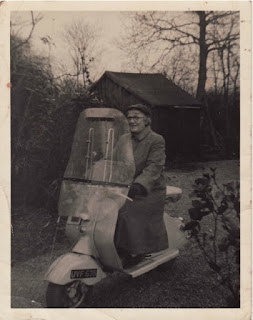 Isn't she great! I love that she's so proudly and confidently adopting a new mode of transport and maybe even flouting convention by doing so. Yet she still looks so "proper" and "no nonsense" with her straight back and thick warm coat and gloves. No dangerously flowing Isadora Duncan scarf for her!

I imagine Aunty Rene to be a strong, feisty woman, determined to make her own path in the post war English countryside when money was short and family life challenging. I know too little about her, and never met her, but she's influenced me and inspired me to embrace new technologies - even when they seem alien and unfriendly.

And although one of my blogging buddies (some of you know Roberto of Roberto's Report) suggested that it's never to late to become a bikie chick and follow in my aunt's footsteps that's one mode of transport that I'm unlikely to adopt!

I'm sitting here licking my fingers and peering into a cold container of leftover orange soup trying to remember how I made it. 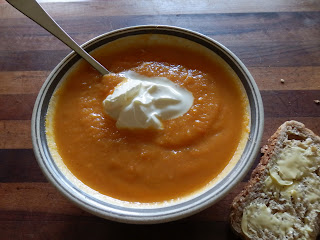 Hubby and I had both purchased carrots (because they were cheap) on two consecutive days and hadn't noticed an overabundance of orangeness in the frig. It had turned cold (where did Summer go?) and making carrot soup seemed to be the order of the day. You can use up a lot of carrots in soup!

Ingredients (possibly)
1 Onion chopped
Garlic (lots)
Chili (of course!)
Carrots 500gm? scrubbed and roughly chopped (or more if necessary to make space in the frig for other things)
Pumpkin (whatever was in the frig - possibly 500gm) peeled and unenthusiastically chopped
Sweet potato (a chunk as big as your fist) Less enthusiasm for chopping now, very random chunks.
left over Red Capsicum (it adds a lovely colour) sample as you chop.
Tomatos (the cacky cheap tasteless ones can be used at a pinch - about 8, but less is fine) very half hearted chopping by this stage.

...and what else? Possibly some white wine, (one for me, one for the soup) maybe some cumin, definitely a smidge of salt and pepper, and a vegetable stock cube or frozen chicken stock. Just enough to cover the vegies or it's too watery. I imagine if I'd had a stem of broccoli I'd have added it too and any sad looking leftover vegietables that could have been slumping forlornly at the bottom of the crisper. And there would have been a few bay leaves, parsley, and oregano ceremoniously added and plucked out at the end of cooking. Oh, there was a very soft apple sitting on the bench, it got chopped up and plonked in too.

Method
Put a small glug of olive oil in a large saucepan, heat. Add the chopped onion, garlic and chili. Stir till sizzling. Toss in assorted chopped vegetables, let them sweat and sizzle then add the heated stock - just enough to cover.

Let it bubble away gently for a 1/2 hour or so. When you can squash a piece of carrot against the side of the saucepan, it's ready to be buzzed with a kitchen wand.

Add a dollop of yogurt and enjoy!

What would you have added (or not)?
.

Oh, ok so their proper name is an Inflatable Rubber Boat, or IRB. Really it doesn't matter! What's way more interesting is the fun you can have with them :D

Years ago, way BC (before kids) we succumbed to the allure of one of these magical, hysterically fun little craft, and had an absolute ball fanging around in it. On occasion we were pulled over by the Water Police, not so much for acting irresponsibly (good grief, of course not!), but because it seems to be expected that the owners of such craft are likely to flout regulations like carrying PFD's (personal floatation device - aka life jacket), flares and things like that which the police happen to consider are extremely important. Being little Goody Two Shoes, we always had the requisite bits and bobs, I suspect much to the chagrin of the coppers!

However, there was one occasion when we kind of bit off more than we could chew ... well, only one occasion for the purposes of this post ;)
We decided to head off to Seal Rocks, in Westernport Bay. It was a long time ago, before it was a no-no to swim with the seals. We pulled up in a little rocky nook out of the swell and waves, all the better to get up close and personal with the fur seals. The smell was overpowering - putrid stench is a better term. It oozes off the rocks and out of the murky pooey water. They stink. The whole area stinks. You gag with the pong. I guess it's the rotting fish, lack of oral hygiene, and the burping and farting of the big boys and girls out there!

My cousin, lovely boy that he was, decided that it would be interesting to get out of the boat and see what a seal looked like from closer quarters. Hmmm. Is this a good idea? They're big. They have harems. They can get rather grumpy and chase off interlopers in an aggressive kind of way. Did I mention they're BIG? Really big!

"No worries" says Cuz, "She'll be right"- and off he goes scrambling awkwardly over the unfriendly black rocks.

It's fair to say I've never seen anyone move so fast and for all intents and purposes enact the classic cartoon manoeuvre of running through the air. The massive bull seal was outraged and determined to see off the interloper who was clearly after his harem! The noise!!! OMG He was furious and letting every being with kilometres know that he meant business!

Slender cousin extracted himself from the sharp, rocky and ultimately unwelcoming outcrop, faster than any of those highly trained lycra clad elite Olympic athletes strutting their stuff on slick surfaces!

Needless to say, my husband and I were doubled up with laughter, tears streaming down faces, yet well aware of the potential danger dear Cuz was facing. Frantically, hubby tried to start the strangely recalcitrant engine and manoeuvre the suddenly slothful boat ready for an inelegant landing and a James Bond style get-away.

Eyes round, and clearly extremely concerned, and making some very odd squawky noises, Cuz flailed and flew, scrabbling at the slick red rubber of the boat, with petite me dragging at any patch of wetsuit and clawing to drag him to safety. Satisfied, the bull seal harrumphed and snorted his way back to his precious harem as we skittered off to a safe distance to reflect on what could possibly have gone wrong.

Which is all a long way of saying we went for a stroll along the safe sands near Seal Rocks this morning and reminisced.

Now I wonder if Cuz has told his children of this particular adventure or will I share the link to this post on FB?
.
Posted by Sue at 7:02 PM 4 comments: