... and what to do if you come across an injured animal.

It's a horrible feeling to run over one of Australia's higher profile, and much loved animals, and it occurred to me in only a mildly tongue in cheek way that knowing what to do really should be included in any immigration qualification test.

Christmas Eve last year, we were pootling along a quiet country road, eucalypts arching overhead, birds twittering quietly in the summer heat, listening to Christmas carols and singing along in a toneless way when a man stepped out into the road and flagged us down. A rapid discussion ensued - should we stop? Could he be a crazy fellow with an axe hidden behind his lycra covered body? Why oh why did he look panic struck and dishevelled?

Figuring that three of us should surely be able to overpower one lone person if he did turn out to be problematic, we stopped and wound down the window a smidgeon. He stumbled toward the car with crazed eyes, gesticulating wildly and gabbling about a koala. Realizing that his intent wasn't malicious, we paid closer attention and made out that he'd just cycled past an injured koala and needed help to get it off the road.

Driving on a bit further, there was indeed a koala in bad shape. It was staggering around at the side of the road and appeared to be injured and disoriented. Doing my best 'action woman' impersonation I commandeered the cheap *billabong blanket and remembering to look both ways before I crossed the road, strode over while unfolding the blanket.

Getting closer it was obvious that the animal had been hit by a car or truck, its eyes were bleeding and it was dragging one leg.  Steve Irwin would at this stage have been proud of his legacy. I remembered watching him leap on assorted animals, and knew that the fight put up by the koala when I tackled him could well be far, far more than I anticipated. I also know they have very sharp, long claws, and no matter how cute they look on tv, they are more like a ball of aggro muscle, intent on discouraging any threats.
Holding the blanket in front of me a bit like a matador, I knew I'd only have one chance to throw the blanket over him, but given that it was a cheap, lightweight one, that I'd not only have to get it over him, but hold it in place, cover his eyes and somehow tuck his legs in away from me so I didn't get slashed.

I was prepared for the angry, frightened LOUD growling of an animal in dreadful pain, and I knew I'd only have one shot at this before he either headed bush or into the road (horrible thought that I might be up close when another car hit him), so I kind of just looked at him, worked out the trajectory of leap needed and went for it.

Me! I still can't believe I did it. I have no idea why I took over, why I didn't shove the blanket in someone else's hands. Strangely some part of my brain took over and did the directing. And this isn't like me, I'm a wimp. I hate seeing injuries where there's blood and I've been known to freeze in an emergency.

Anyhow, there I was, lying on top of the violently squirming, extremely strong koala, being savagely growled at, now wondering what the hell I was going to do next.

It was all well and good to have his limbs tucked in (no claws in sight) face covered (it's what they do on tv, and is presumably an attempt to calm the terrified creature) but he's got 4 legs, each ending in 4billion long, sharp claws, and a mouth full of teeth, and I have absolutely no idea how I'm going to lift him into the esky that my hubby and daughter have brought over. If I let go of any bits, I'm likely to get severely slashed, gouged or torn to bits. (Reminiscent of classic drop bear injuries.) Not good.


Meanwhile, my daughter had called the local wildlife help service (there were numbers on signs along the road) and had been given details of the closest vet that we could take the injured koala to, to receive treatment. This is a free service provided by vets! Hooray for vets!!

A trucky had stopped and supplied a pair of leather gloves, and the extremely concerned lycra clad cyclist was hovering overhead clucking encouragingly.

Hubby and daughter manoeuvred the esky as close as possible and two of us lifted the distressed animal into it. I exchanged phone numbers with the cyclist as he wanted to know the outcome and hoped beyond hope that the koala could be rehabilitated.

The drive to the vets was distressing for all of us. I was glimpsing in the rear vision mirror and every so often could see an arm extending up from under the lid much like a vampire rising from a coffin. It was horrible and needless to say, he kept growling.

The vet was wonderful, but the outcome wasn't. It turned out that the koala had been hit by a car or truck some time previously, and that large cut was filled with maggots, he'd then been hit again which had damaged his head and eyes. The vet was very compassionate when he told us he'd put the creature down. The worst part was phoning the cyclist to share the news with him, he was clearly very upset and couldn't understand why no one else had stopped to help, as a number of cars had driven past him ignoring his pleas for help.

(Even though the service was free, we did make a donation to help cover expenses.)

If you do happen to hit an animal and kill it, it's best to drag it well off the side of the road. In many areas Wedge tailed eagles and other birds and animals will feed off the carcass and far too many of them are also killed because they are unable to move to safety quickly enough. 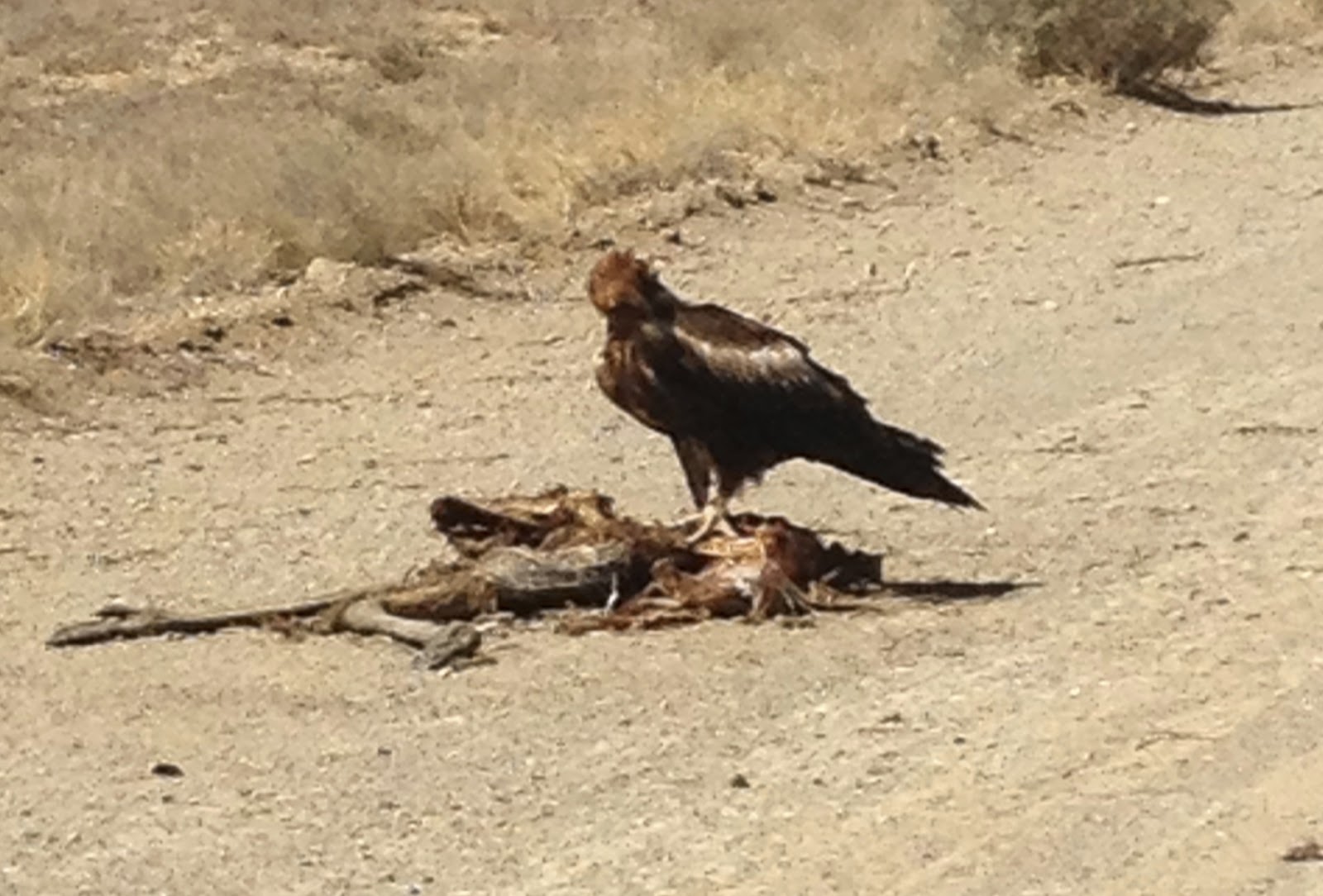 A wedge tailed eagle with its wingspan of over 2 metres (about 7ft 5in) and length of around a metre (3ft 6in)  is slow moving on the ground and needs time and space to take off. Seeing a pair of these magnificent birds splattered on the roadside is horrible. 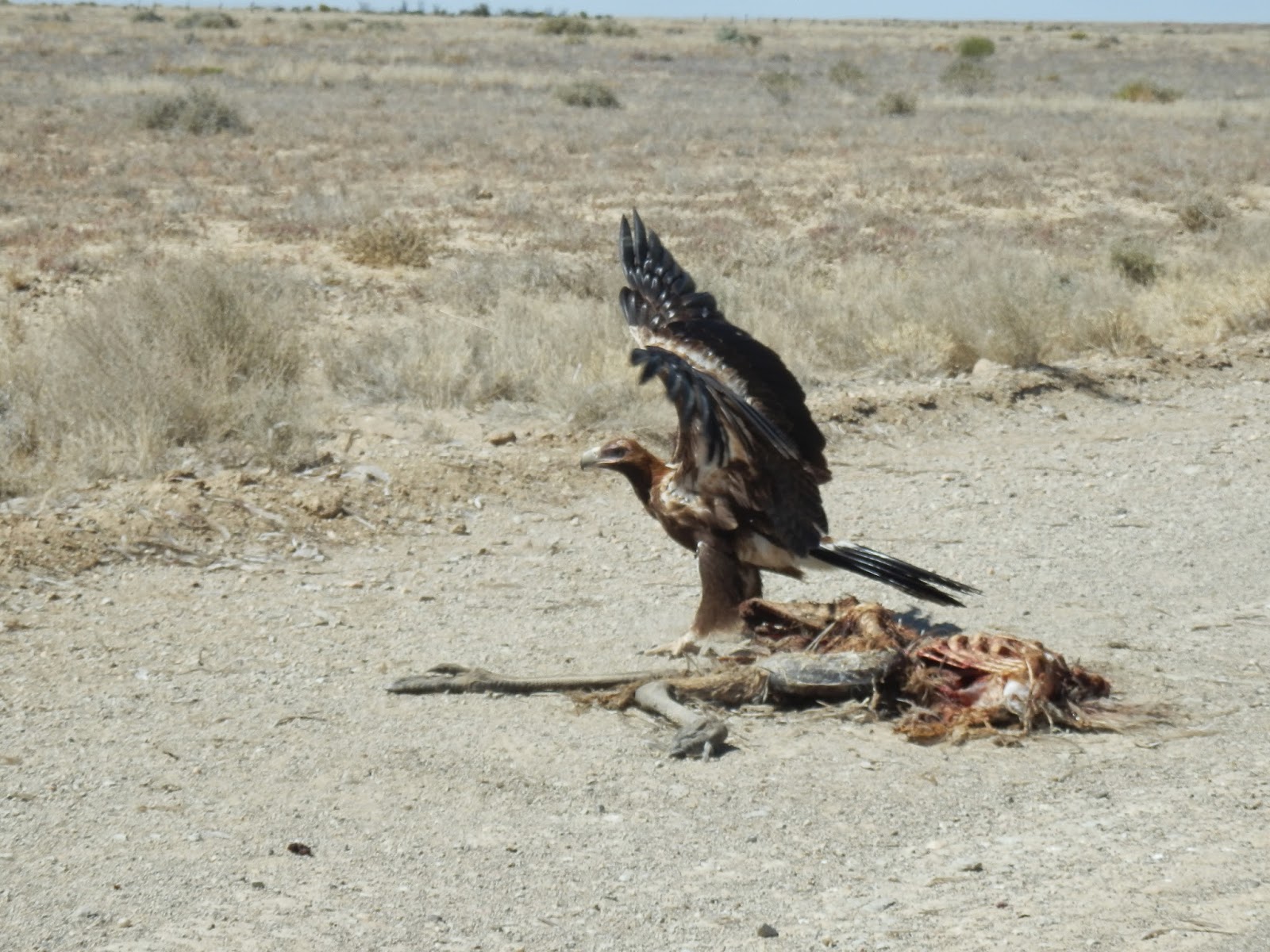 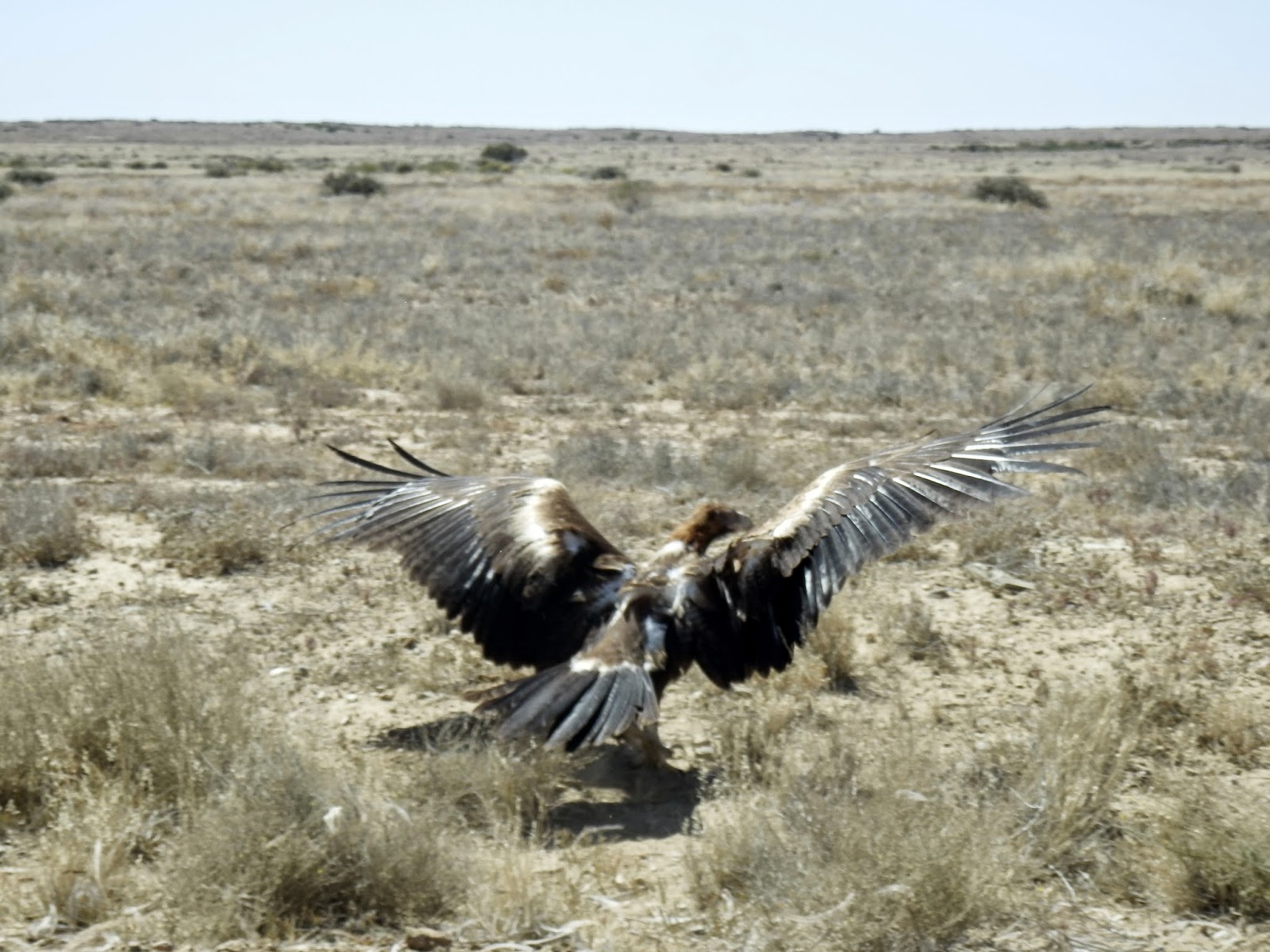 Hunters should also ensure that any feral animals they kill are well off the side of the road.

Wallabies, kangaroos and emus are scatty to say the least. They'll appear to be heading in one direction, then completely without warning will leap in the opposite direction, often directly into the path of the car. Beware when you see them! They're completely unpredictable and passengers, in particular children, can be extremely distressed when one is hit and run over. 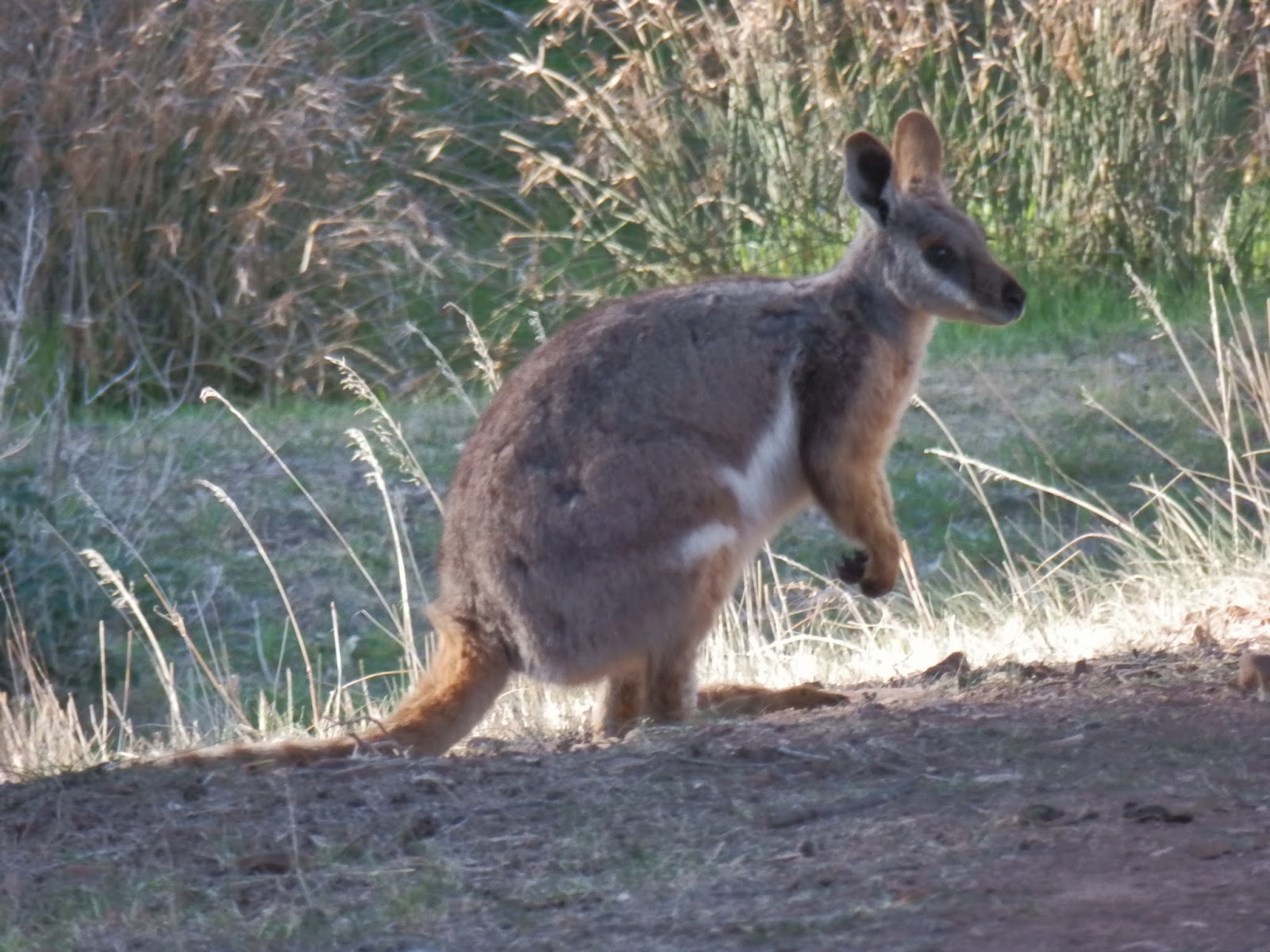 A comprehensive list of wildlife care groups is at:
http://www.fnpw.org.au/resources/wildlife-carer-arescue-groups-australia

These groups will also give instructions on how to manage if an animal is injured, and you are unable to get it to a vet.

*A billabong rug is a woollen picnic blanket with waterproof backing. The one we had in the car was a cheap imitation which was good as it needed to be discarded after use.

This had a sad ending, but please don't think I am strange when I say I am proud of you.

Thanks Liza, I doubt I could ever think you're strange! I often think about you and your family even though I'm not quite as active in my visiting as I was.
You should be coming into spring and I imagine your garden is beginning to burst with life!
cheers
Sue

Hi Sue - what a 'good' story and I'm happy to hear about the phone numbers for the wildlife service along the route. I'm like you - well like you were .. a wimp I would have been .. what to do etc

Congratulations on making the right decisions .. even if the outcome was not satisfactory - it probably was the best one in the circumstances and you stopped the koala a long lingering death in the bush.

I'm glad you communicated with the cyclist ... I guess people didn't stop because they weren't as resourceful as you ...

Cheers to you and the family -Hilary

Thanks Hilary, I still don't know what got into me to take over as it were. We were lucky to have an esky in the car that we could empty out and use.

Lucky you heading into spring! I've been busy gardening and composting and am excited to report that the garlic is up :-)

You acted with your heart and mind in true synch - like Liza I'm proud of you. Here there is no chance of getting to a vet so usually the animal needs to put to death as quickly as possible. I like that your vets do this service for free - not anything I've noticed in Canada. More's the pity.

Thanks Jan. The vets I've been to all have donation tins in their waiting rooms which might help cover a small amount of costs. I haven't needed to personally kill an animal and don't know how I'd manage.