Coppins Track on the southern tip of the Mornington Peninsula. Victoria. Australia. 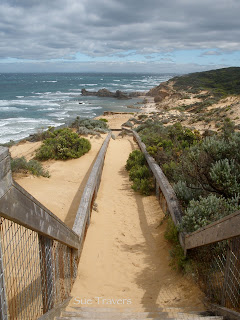 A narrow strip of protected land runs along the stunning coastline at the southern tip of the Mornington Peninsula. Just outside the expensive tourist town of Sorrento, a short windswept path named Coppins Track winds through the sand dunes. The name came from an early settler, George Coppin who promoted the commercial opportunities and natural beauty of the area during the 1800's.

In the 1870's people visited here from Melbourne in a paddle steamer which must have taken significantly longer than the current road trip of 90 minutes (according the extremely optimistic advertising material).

Although it was a blustery day when we visited, usually in Summer at low tide there are deep pools for swimming or practising your back flips off the rocks.  (There are occasional broken legs when people misjudge the distance or angles.)

In the photo above, it's high tide and all the rock shelves and pools are covered in the white water of breaking waves. 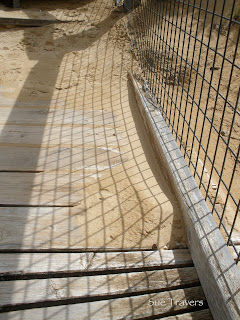 Sand is encroaching on the boardwalk, blown by the strong winds off Bass Strait. The weak sun came out for a few minutes and provided some fleeting shadows, quickly captured before they vanished for the day. 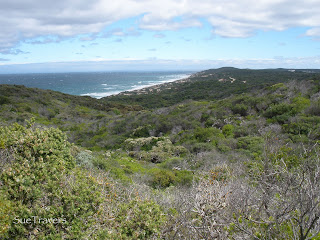 The first white settlement in Victoria was established in 1803 not far from here. It wasn't a very popular site amongst either settlers or convicts and was abandoned after a short time. (No doubt to the short lived relief of the local aboriginals)

A few convicts escaped, some were quickly recaptured, some died. Amazingly, one named William Buckley survived and lived with the local aboriginals for 32 years. He eventually gave himself up, and described the subsistence life of the Boonerong people who had allowed him to live with them as being very brutal and in no way idyllic.

This view is from Coppins Walk looking south across the sand dunes and low vegetation towards Bass Strait. To the right of the picture, across the low hills is the swishy tourist town of Sorrento and the beautiful Port Phillip Bay with its fabulous beaches. (I admit I'm biased!) 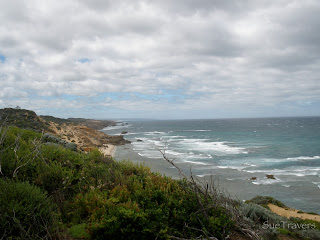 If you squint you can just see a rotunda a bit further along the path on the high ground on the left. It's strategically placed for resting and oohing and aahing over the stunning views while enjoying a picnic. 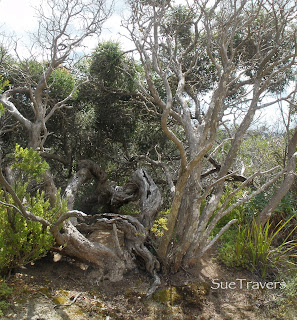 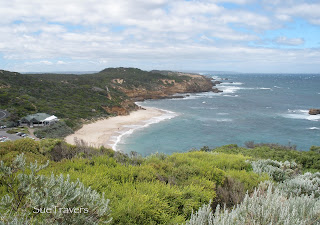 Nearing the end of the walk, overlooking the "All Smiles" Cafe at the Surf Beach. I waddled back to the car after an excellent hamburger and coffee.

Thankyou to Tracy of Hey Harriet for so generously hosting Shadow Shot Sunday. Do pop over to see shadows from around the world.

What an incredibly beautiful place and such delightful shadow shots for the day! Thanks for sharing the beauty!

The beauty arrives the rugged land full of erosion rocky barriers. The beach is only a small part of the scene, the craggy rocks predominate - the sandy part that sun worshipers crave is not what this beach is about. The shaggy landscape is beautiful. Happily for us viewers, the settlement died out due to being to rough to inhabit. Thus, it is so lovely to appreciate the the view in its undeveloped state. It is a great view! have a fine week!

I would love to be in there as in right now hehehe, what a gorgeous place!

My Shadow Shot, have a lovely weekend!

My shadows, please come and see.

Sounds like you're mighty close to the Greyscale Territory, what fascinating history and fabulous views...it's OK to brag...I'm green with envy though!!!

Beautiful indeed, and well captured. The erosion is encroaching all over isn't it??

Love the long shadow of the fence line. Gorgeous
scenery!

Great shots, Sue. Looks like the sand is getting everywhere. (I have been given an Olympus camera! ;)

You make me cry - I'd love to be in Australia right now - beautiful landscape, sea... I hurt my arm and not able to lift things and I stand typing this...

Ohhhhhhhhhhhh, so very pretty! Beach scenes are always a favorite of mine! That very 1st photo is like a welcoming mat to all the beauty that surrounds!!

Have a glorious Sunday!! Stop by to visit if you can find time. Your company is always welcomed.

A wonderful history lesson and travelogue Sue. I'd love to be in such a place. I'd skip the touristvtraps and just sit and marvel at nature. Love the sand making its own sculpture. Nice post, thanks.

Sue this was an extraordinary tour!
It is so rugged and so beautiful .. the history behind it is amazing .. just the story of survival makes you wonder how people made it through life back then. We are so spoiled now aren't we ? LOL
Thank you for dropping by my blog: )
Joy

Oh Sue I love the first pic a lot, and of course the others. A beautiful part of Victoria. Enjoy.

Hi Sue! What a fabulous place to be....and look at those clouds - wow! Loved that Moonah branch above - how cool!

Oh my gosh--I don't know which shot to comment on--they are all lovely. I really like the "walkway" going down to the beach and all the ocean scenes are spectacular. Mickie

It's been a pleasure sharing this lovely coastline with everyone. I learnt a lot from the little bit of research I did which was an added bonus, I'm glad you enjoyed it too.

Ralph, I like your use of the word shaggy, very apt.
SR-JR, yes we both enjoy this wonderful part of the world.
Cynthia, sometimes the erosion can be very dramatic when a whole cliff face collapses.
Angie, congrats on the new camera!
BLOGiste, sounds like you're having a rotten time at present, take care of yourself! I spent months having to stand to use the computer, now after extensive acupuncture I can sit, it's such a relief. Sending you some healing thoughts.
Anni, You are very welcome to share a virtual picnic with me here! (or maybe on your beach when the crowds thin.)
Spadoman, ugh, those tourist traps are a menace aren't they, but on a selfish note, it means there's more room to soak up the view for the rest of us. I'm pausing to soak up your salutation of peace, thankyou.
Gen, your link doesn't seem to be working
CGJ, so true, I want to explore that a bit more another time.
Jo, it's a lovely day outing with the children too ;)
SummerKitchenGirls, I like the Moonah trees too
Mickie forgetmenot, thankyou!

thankyou everyone for dropping by and for your encouraging comments, I really appreciate them.

What a beautiful coast...and lovely shadow shots! I would love to see it at low tide.

what a treat this morning to take this tour with you. I love the wild vastness of the land and the ocean. and it's so foreign for me, even the tree names. I love that. you make my desire to visit your land even stronger. thanks for being such a great tour guide this Monday morning. Sue, I hope your day (and week) is grand.

The light is so pretty in these shots. Wish I were there!

I do love your blog... such beautiful pictures. Thanks for visiting mine. My poetry blog is

Lisa, I'll see what I can do!
Becky, thankyou so much, I'm really glad you enjoyed the tour. I was thinking of you wanting to visit Australia when I was writing.
EGW, thankyou, it's hard to remember looking at the photos that it was really a very blustery day, threatening rain.
LKH-K, Thankyou and welcome, it's nice to have you drop by.

All the best, Boonie